It’s a toasty 92 degrees outside in southwest Florida, so I’m not in the mood to heat up the kitchen. Been digging cold foods lately. To fulfill this need, I bring you Tyler Florence’s Cold Sesame Noodles, with a few tweaks to make it diabetic-friendly and gluten-free, of course. It incorporates my obsession with peanut butter into a savory dish, and is a delicious way to get in your daily veggies. So what if you’re impatient like I am, and just can’t wait for whatever you’re cooking to cool down because it smells ridiculously good? Fear not my impulsive friend, because these flavorful noodles are amazing served hot as well. I enjoy them most after they’ve been chilling in the fridge, though. Gotta give time for the flavors to meld, baby!

To make over this dish, we gotta ditch the sugar and standard noodle varieties, which pack a carby punch. This feat is simpler than it sounds!

You can make zucchini noodles (“zoodles”) with this nifty spiral slicer and some zucchini or summer squash.

The alternative is a new product called shirataki noodles. They’re nothing short of miraculous! They contain only 2 grams net carbs per 8 ounce package if you can believe it! The only caveat is their chewiness, which I don’t mind, but a couple of my pasta-loving testers called it out. I guess when you haven’t had noodles in a year, you take what you can get!

Another note about this recipe is that it makes a ton of the peanut dressing, so I reserved about one third of it for later use. This sweet and spicy sauce would be delicious with some chicken or a crisp salad. It’s seriously good enough to drink.

Cold Sesame Noodles
Adapted from a recipe by Tyler Florence

Preparation:
If you are using shirataki noodles, empty out both packages into a colander. Rinse for 1-2 minutes, until there is no lingering fishy smell. Line colander in paper towel and mix a few big pinches of sea salt in with the noodles, stirring them around to coat. Drain for 30 minutes. Rinse again and dry well. Heat sesame oil in a skillet over medium-low heat. Stir noodles around skillet for a couple of minutes, until they start to release some moisture. Transfer noodles to a plate or a bowl.

If you are using zucchini, use a spiral slicer to julienne into noodles.  Salt zucchini liberally, then transfer to a paper towel-lined colander. Let sit for 30 minutes to draw some of the moisture from it. Rinse well and gently squeeze dry with a paper towel. Heat sesame oil in skillet over medium low heat. Add zucchini and carrots to skillet and stir it all around for 1-2 minutes, until heated through and a bit more tender. Just barely cook the veggies. You don’t want them soft and mushy! Transfer to a plate or bowl.

Mince up ginger, green onions, and garlic cloves. Whisk sweeteners, peanut butter, vinegar, soy sauce, and hot water together until sweeteners are dissolved and a smooth sauce is formed. In a skillet, heat the macadamia nut oil over medium-low heat. Add the minced mixture along with the red pepper flakes and cook for 3 minutes, or until fragrant and softened. Add peanut sauce to skillet and cook for one minute. Add noodles or zucchini to pan, and remove pan from the heat. Stir well to coat, adding half the sesame seeds if desired. Serve at room temperature or refrigerate for later use. Garnish with the rest of the sesame seeds, julienned cucumber, red pepper flakes, and chopped peanuts if desired. 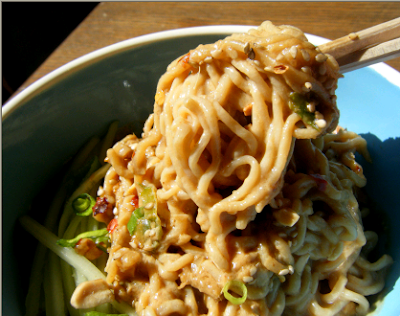 A peanut butter-y main course must be followed up with an equally peanut butter-y dessert! Any Ohio State fans out there? I never realized that Buckeyes were associated with anything other than Christmas until Google enlightened me. Whatever these addictive candies mean to you, they rock, with a smooth and sweet peanut butter filling coated in rich chocolate. To replace the copious amounts of powdered sugar in the traditional recipe, I used a couple of surprising ingredients–ricotta cheese and coconut flour. I promise they don’t taste like cheese or coconuts. They’re basically a party in your mouth. Make a small batch if you like PB as much as I do!

So I had to sample a few before the photo. Had to make sure the recipe was just right! 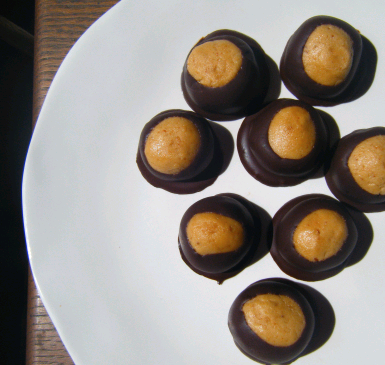 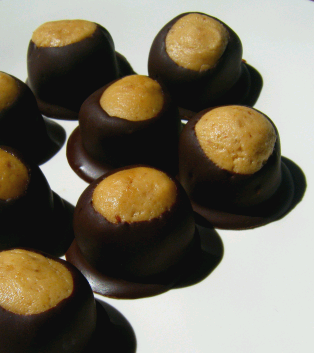 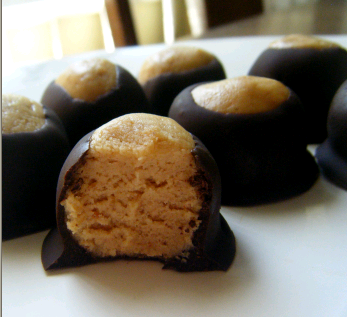